Keeping Hope Afloat: Pointwest and the Yellow Boats of Hope for San Remigio

It has already been a year since Super Typhoon Haiyan, locally known as Typhoon Yolanda, struck the Philippines. We began mobilizing company-wide donation drives so as to be able to provide relief goods to the destitute areas in the Visayas.

The fund drives included donations from employees that were matched by the company and savings from our Christmas Party as we opted to have an austere one. More than the huge amount that we generated, it was the employees’ willingness to help and support that made it really overwhelming. San Remigio men carefully unloading the boats that were manufactured from Talisay City.

Under the ambit of Project Yolanda, we were able to launch several programs which included donations of the following: 6000 pairs of slippers, 500 packs of Hygiene Kits, 250 Play Relief Kits and 20 big boxes of clothes. I remember personally shipping all these in Manila North Harbor and coordinating with the recipient community in Alangalang, Leyte; Roxas City, Capiz; Jaro, Leyte; Carles, Iloilo; and Baybay City, Leyte. Just to make sure that they get to receive the goods at the soonest possible time. There were also donations given to NGOs including the University of Cebu and Aboitiz Foundation (RAFI) which helped fund the Tent Cities in DaanBantayan in Cebu and several relief operations in Capiz.

Never did we forget about our own community. We, the Core Team of Project Yolanda, together with the Senior Leadership Team, invited 10 Pointwesters whose immediate families have been greatly affected by the typhoon, for a ‘kamustahan-merienda’ session to check on their families and their needs. A humble sum of money was given to them as assistance.

As the need for relief goods subsided, we were then thinking of ways on how else we can help. Since most areas affected are surrounded by water, we have thought of giving them boats as a means of livelihood. We have consistently thought of giving out boats but the question has always been — HOW? Honestly, I knew nothing about Yellow Boat of Hope. I began researching about the organization and its founders. Luckily, they are all over the internet and even in Wikipedia. I also checked their Facebook page and their photos tell a lot about their achievements. I was 100% sure that we are collaborating with the right people.

We spent four months of relentless coordination with Yellow Boat of Hope as we were eager to know every detail. I have been constantly checking on the status until they informed me that the boats are ready to be turned over. I was excited to tell our big bosses that finally, the boats are coming out.Â

We flew to Cebu the day before the turnover as we knew that going to San Remigio is such a trek. Luckily, one of the YBH volunteers happened to work as a Resort Officer in the Beach Club where we stayed. He volunteered to bring us to the public beach where we had our turnover rites.

We arrived at Poblacion at around 8:00 in the morning and we were welcomed by the community representative, who also happens to work as a Day Care teacher in Brgy. Anapog. She likewise helped in determining the deserving recipients by nominating those who did not have boats of their own. She told us that the fishermen have been patiently waiting in the beach area for hours anticipating the arrival of the yellow boats.

Finally, I get to meet the Lead Implementer of YBH in Cebu whom I’ve been texting nonstop just to be able to make sure that everything is well-coordinated. I also got to meet the other dedicated volunteers of YBH and the boat maker.Â

One of the fishermen signing the Deed of Donation

There were about a hundred boats delivered, 20 of which came from Pointwest. The fishermen started unloading the boats from the two trucks that travelled all the way from Talisay City where they were manufactured. They carefully lined up the boats along the beach area. As soon as we finished arranging the boats, YBH already started calling out the fishermen recipients to ask them to receive the boats by signing the Deed of Donation. Immediately after signing the papers, each fisherman went to their own respective boats to attach the outrigger.Â Yellow Boat recipients,volunteers, and Pointwesters during the turnover rites in San Remigio, Cebu

We came to interview two kids who have been helping their father in attaching the outrigger. The father shared that his younger son even had a countdown reckoning how many more nights before they receive their new boat. In another instance, one fisherman recounted how they would ask other fishermen who have boats if they can join fishing as they do not have their own boats. His voice was cracking when he recalled how their town was wiped out by Typhoon Yolanda and not a single boat was spared. 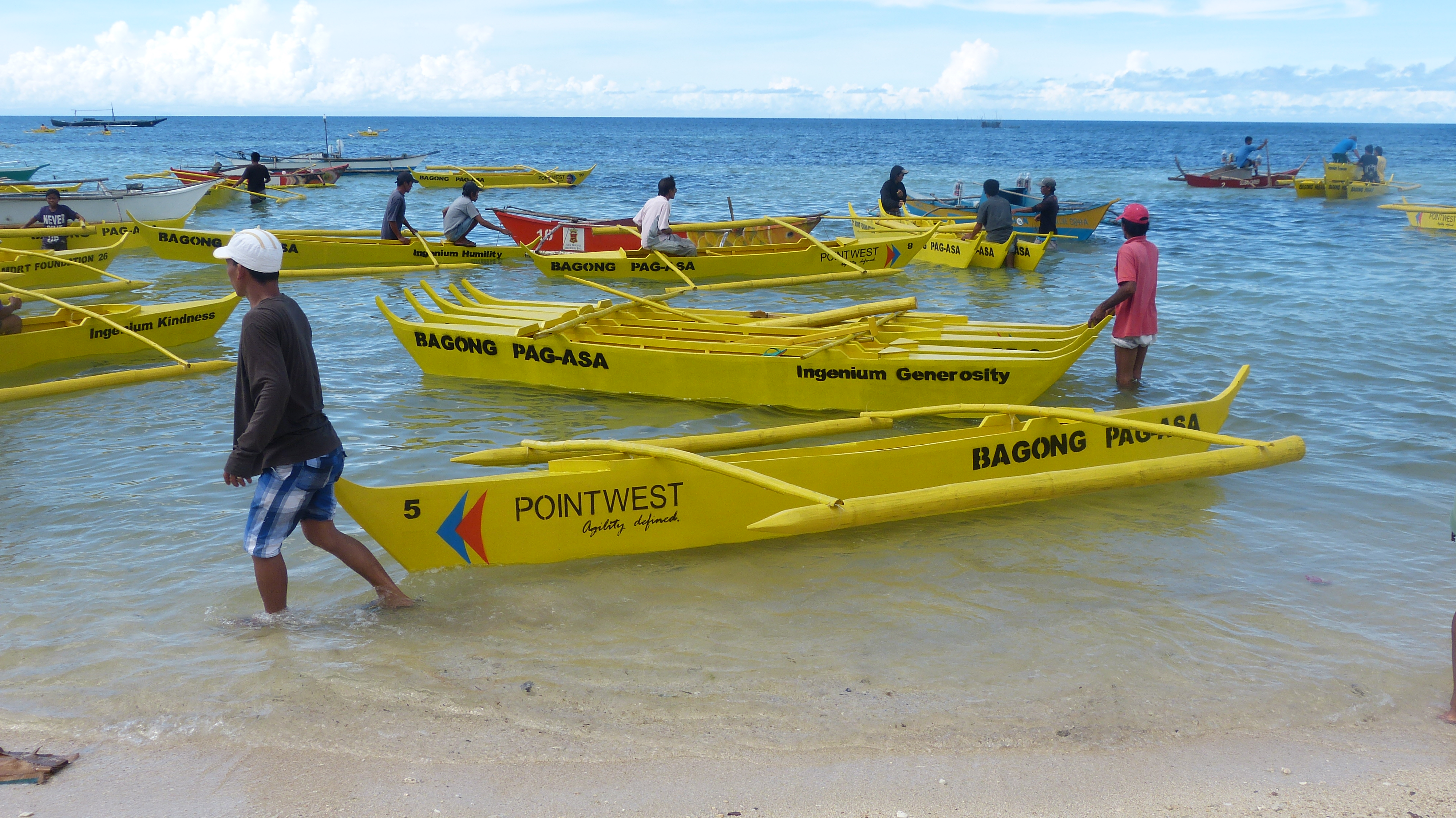 Before bidding goodbye, we were gathered again in the beach area. Three fishermen stood in front, one after the other, to say how grateful they were for the boats they received. Even though I could hardly understand the dialect, their gestures and tone of voice were enough for me to feel how delighted they were. We, on the other hand, thanked the fishermen for giving us the opportunity to help and share our blessings. We also reminded them to take care of the boats as the funds used to be able to buy these boats came from the donations of our employees who are painstakingly working, just like them.Â