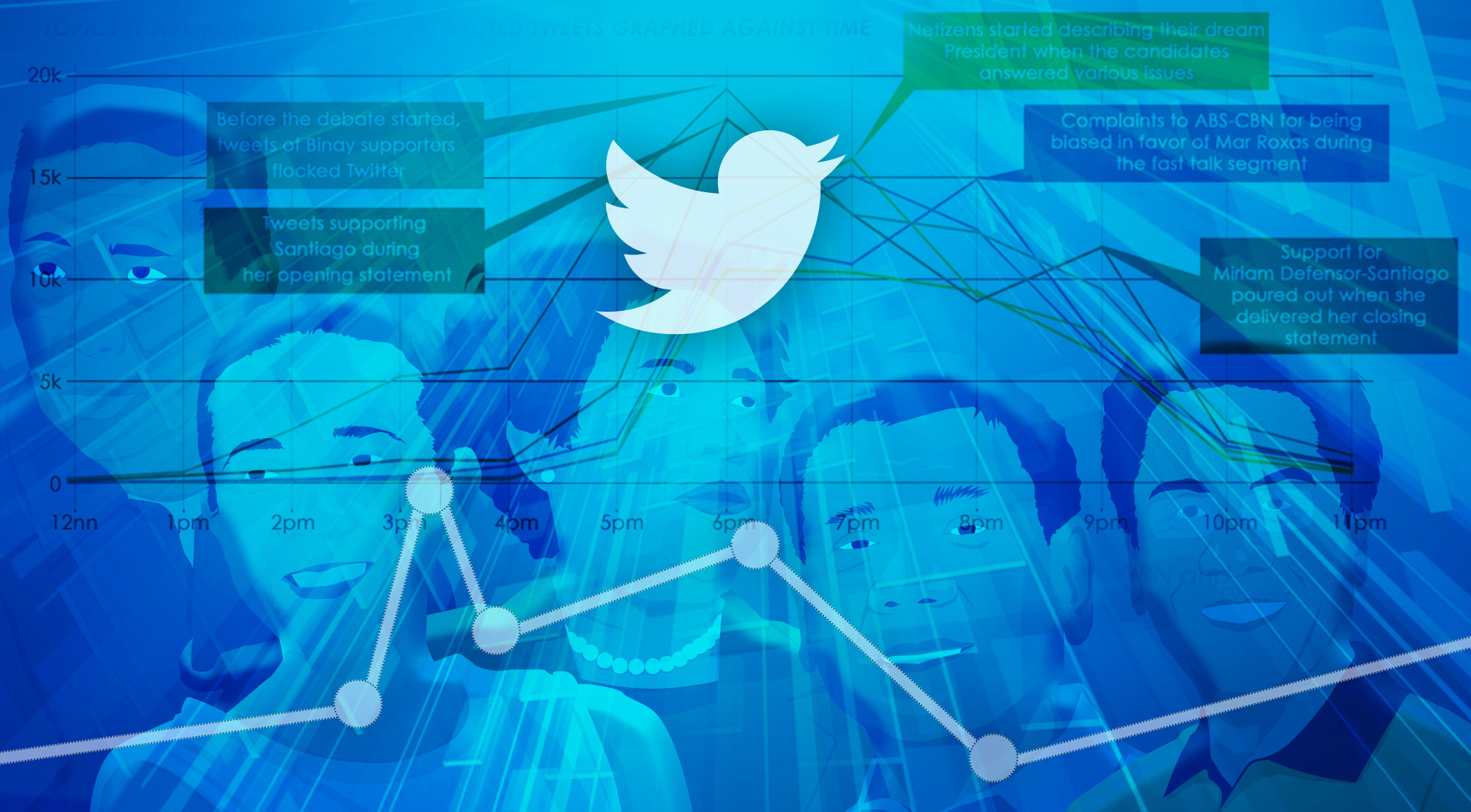 After a few grueling months of campaigning, the election season came to an end. The national and local elections this year contained many memorable events, very prominent of which was the re-introduction of the Presidential Debates. Along with the prevalence  of social media, never had Filipinos been freer to share and express opinions about the candidates and their platforms.

Thus, it was of particular interest to the Pointwest Data Science team to study whether the debates helped the candidates in their campaign or not. While there was no direct way to measure such an effect, we can at least discover how the debates could have affected people using social media. The team has published a series of articles about the second and third legs of the presidential debates.

Some analysis slightly differed from one leg of the debate to the next. The sentiment classifier used in the 3rd presidential debates (Read: Analyzing Tweets to Final Thoughts) included more words than the one used in the 2nd leg (Read: From Tweets to Thoughts). The emotion classifiers used  in the 2nd and 3rd debates (Read: Emotions Before the Elections – Text Analytics and Emotions: Through Pictures an Words – Social Media Analytics)followed the same algorithm but used different training sets.

In both cases, while not ideal, the results of both analysis were still relatively comparable to each other. This gives an idea on the differences and similarities of the expressed emotions of the netizens during the two debates.

We now take a look at the share of each candidate within each analysis to find out how the netizens’ perception of the candidates differed from the 2nd debate to the 3rd debate. When it came to Twitter Share of Voice, results from the second and third presidential debates differed substantially from each other.

The tables were turned for some of the candidates, particularly for Vice President Jejomar Binay and Senator Miriam Santiago. From being first in the Cebu leg of the debate series back in March 20, Binay dropped to fourth place in the final stretch held in Pangasinan last April 24. Mentions of him rose in the second leg because of a misunderstanding between the designated moderator and the camp of Vice President Binay on the rules about bringing documents. This caused the delay of the debate proper.

On the other hand, Santiago propelled herself up to second place, coming from the bottom of the list. The differentiating factor for her could primarily be her attendance, since she skipped the Cebu leg to undergo a clinical trial for a new anti-cancer pill.

Former DILG Secretary Mar Roxas may have dropped one position in the rankings, but we can observe that his percentage pattern was still consistent relative to the others. On the average, Senator Grace Poe can be considered as the least talked about candidate in the PiliPinas Debates.

From being ranked third in the second leg, Davao City Mayor Rodrigo Duterte finished on top as the debate series concluded. For both debates however, the other candidates kept a close distance to him in the Share of Voice ranking. Negative sentiments remained largely the same. Only Mayor Duterte had an increase in negative sentiments, from 18.71% in the Cebu debate to 20.39% at the Pangasinan leg. For all the presidential candidates, neutral sentiments went down. Across all emotions, Mayor Duterte showed the least movement in ranks, which remained the same for all emotions save for one, Sadness, where he dropped from having the highest share. Duterte consistently topped the share in Happiness and Love emotions.

Sec. Roxas increased the rank of his shares by one in 4 of the emotions (Anger, Disgust, Sadness, and Love) while retaining his previous spots in the other two (3rd for Happiness and 4th for Interest). He topped the share of tweets in the emotions Anger and Disgust.

Finally, Sen. Santiago increased her rank in all the emotions, getting the top 2 ranking in shares for 5 of the 6 emotions during the 3rd debate.

The overall Twitter share of voice might have played a big part in the changes that happened on the shares of each candidate for each emotion. The increase of Sen. Santiago and drop of VP Binay in all emotions could be evidence of that.

Turn to Part 2 of this Study (Read: Comparing Social Media Analysis and Electoral Results – Part 2) where we look at the top Emojis, and our conclusion to see whether the election results are are consistent with the reactions over Twitter.