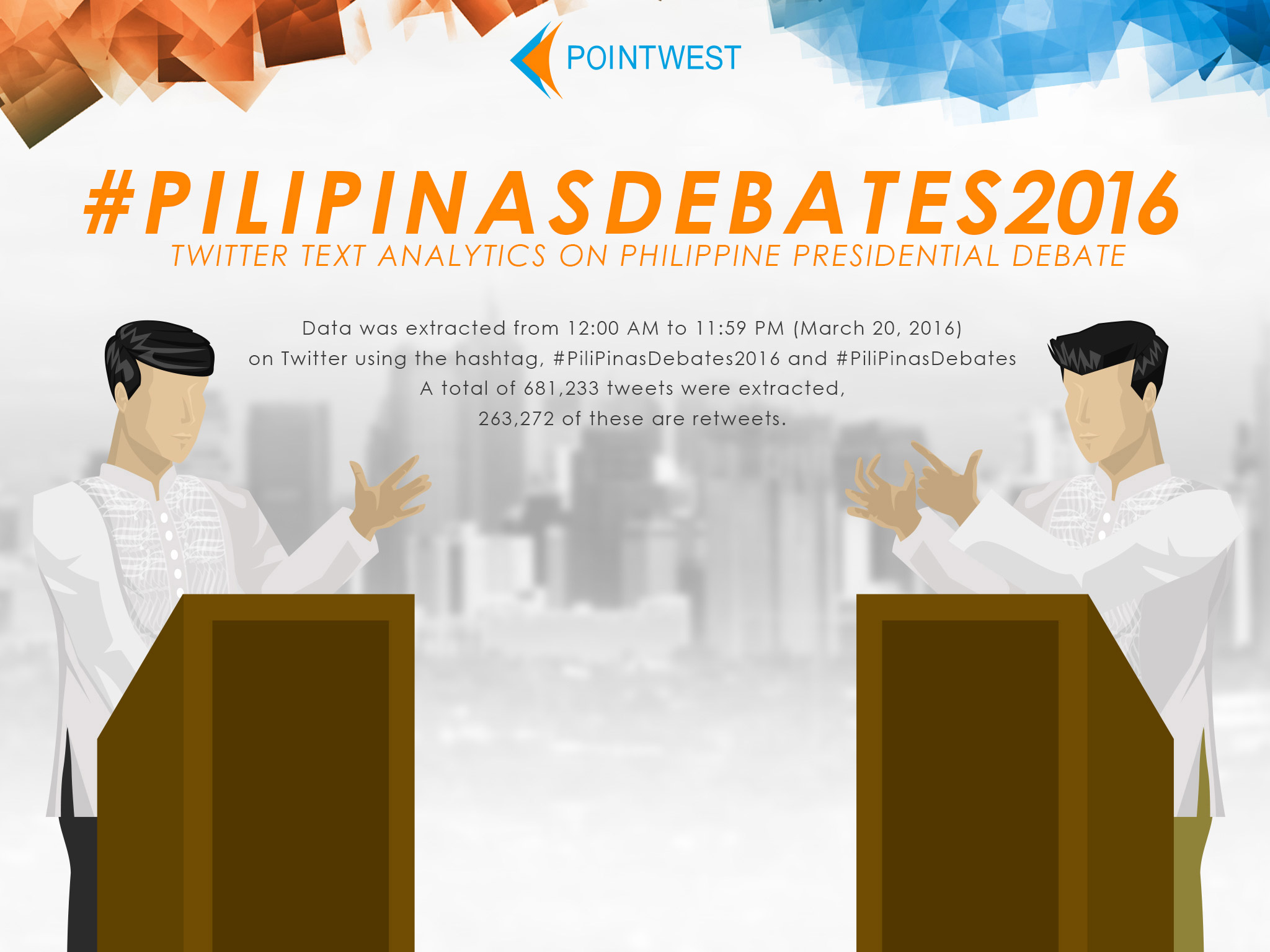 Emotions Before the Elections – Text Analytics

Just recently, we published “From Tweets to Thoughts,” a story that tackles the tweets behind the Cebu leg of Pilipinas Debates 2016. It identifies whether a tweet mentioning a certain presidentiable is positive, negative or neutral based on context. However, it is important to note that it does not necessarily cover how the user feels about his or her tweet.

In this article, we delve further into the inspection of the highly talked about event; this time on the emotion behind the tweets. We used the same extracted data in our previous analyses of the debate.

The variable measured is the emotion of the tweet with regard to its subject. This is used as a proxy for the true variable we want to measure: the emotions that the author felt about the candidate they tweeted about. The tweets were filtered using the nicknames of the candidates mentioned in the previous article. The filtered datasets are not mutually exclusive; that is, a tweet that mentions two candidates will be included in the the datasets of the two candidates. However, the emotion of the tweet remains the same.

The first PiliPinas Debate tweets were analyzed to determine the smallest set of emotions that can be used to classify tweets about the event.  After the initial assessment of the dataset, six emotions were chosen, namely: anger, disgust, love, joy, interest, and sadness. Also included is a category where tweets with no strong emotion fall under. These are tweets that merely state a fact.

Each tweet was then tagged with the emotion that best describes the feeling the author wanted to convey. It might be argued that emotions overlap, and in reality, that is the norm. However, for the purpose of this case study, only the prevailing emotion of the tweet was chosen. An algorithm to classify tweets from the March 20 debate was then created using the tagged tweets.

Emotions and Their Meanings

Tweets that were classified as “angry” usually express distaste for a particular candidate or event during the debate. Tweets that wish ill upon candidates are examples of those that belong in this category.

These are tweets that reject or dismiss their subject, such as a person dismissing a candidate’s opinion. The intensity of this emotion ranges from mild aversion to outright disdain for the subject.

Sad tweets are those that express sorrow whether because of sympathy or disappointment towards their subject. They commonly have the words “awww”, “huhu”, and “sayang”.

Tweets in this category usually show extreme support for a candidate or a certain portion of the debate. These tweets often use words of affection (e.g. love) or slang words (e.g. slay, yas) that convey the delight of their writers.

Tweets classified under this emotion are the generally happy ones, whether because of satisfaction or appreciation (but not necessarily support for a candidate), or of making fun of a candidate or an event. They usually contain words that resemble laughter such as “haha,” and variations of this, or internet slangs used to mean amusement such as “LOL.”

Tweets expressing interest on the debate or the debaters’ statements belong in this category. An example is a tweet that purely asks a question.

Below are the emotions with the corresponding candidates who dominated the tweets.

Binay was the most mentioned candidate in the tweets showing anger. Roxas came in second, having around half of the share of UNA’s standard bearer. Some of the angry tweets about the two were expectedly prompted by their involvement in the one-and-a-half hour delay before the debate (In fact, most of the topic of the tweets extracted were related to the delay. Check out our article on Topic Analysis.):

These are some angry tweets at the other candidates:

This is the crux of why Duterte should not win: no matter what his policies are, he promotes murder. PLEASE. #PiliPinasDebates2016

grace,
no amount of campaign funds will justify ur decision to overlook danding’s corruption w/ the coco-levy funds. #PiliPinasDebates2016

Where are you now when I need you @senmiriam Disgust, another negative emotion, gives us the same results as Binay garners the majority of tweets expressing profound disapproval. Roxas again comes in second, with a significant distance from his other opponents. By inspecting some more disgusted tweets, we discovered that the candidates were not their only subject. Numerous tweets were also annoyed by the comments of the political analyst invited for the pre-debate coverage, which they claim are biased.

Duterte must have said or done something that weighed down the feelings of viewers as a big wave of sad tweets mentioning him flooded the Twitterverse. The remaining four fought neck-and-neck, all of them having less than a thousand sad tweets. DuRiam, not being complete on the second debate, saddened their fans, as apparent in their tweets.

Other sad tweets are about being unable to choose between two or more candidates.

Most of the love tweets were dedicated to Mayor Duterte and Senator Poe. It can be noted that these two raised their hands in favor of death penalty.  The absentee, Senator Miriam Santiago garnered the “least love” mostly in the form of “get well soon” and “take care” tweets.

The rankings of the candidates for this particular emotion coincidentally agrees with their respective spots in the  Pulse Asia Survey released days after the 2nd Pilipinas Debate (except that Duterte and Poe are tied in the survey). For the joyous tweets, Mayor Duterte again had the biggest number of mentions. People expressed excitement specifically about the Tapatan Segment, where Vice President Binay got the chance to ask the former. Days just before the debate, Mayor Duterte challenged Vice President Binay to withdraw together from the presidential race if they are both proven guilty of being corrupt.

The “Binay vs. Roxas” was also the content of some of the happy tweets. Aside from the “notes” issue,  the two hit each other on the topic of tax and energy crisis.

Binay vs. Roxas. This is interesting. Hahaha! #PiliPinasDebates2016

Netizens paired Senator Poe with Mayor Duterte, forming DuPoe. The two exchanged jokes on stage during the delay, shown in the behind the scenes video.

Before the cause of delay was disclosed, some jokingly attributed it to Senator Miriam changing her mind about attending at the last minute. There were more curious tweets about Vice President Binay than any other candidate. Some tweeters wondered why the candidate had to bring “notes” during the debate.

binay making all d delays..grrrr..why do u need a notes if u are really honest wd wt u will say..speak frm the heart..#PiliPinasDebates2016

Mayor Duterte came in the second spot in terms of interested tweets. The tweets were curious about a certain “deleted video” of Duterte.

Although there were already news reports prior the debate of Senator Miriam not being able to attend due to a clinical trial, there were still a lot of tweets asking why the senator missed the important event, or how she would do if she was there.

What would happen if Sen.Miriam is present. When the cat is away, the mice will play #PiliPinasDebates2016

Aside from the official hashtag #PiliPinasDebates2016, one of the hashtags used by some viewers is #SolusyonNiMar, with some of the tweets expressing interest in hearing the latter.

Many wanted Senator Poe to elaborate her answer on what she would do if one day, two of the coastguards were bombed. The question was asked by Mayor Duterte during the round 2 or Tapatan Segment of the debate.

Dear Grace,
Stop the rhetoric. Answer the question. What will you do if China will bomb our coastguard? #PiliPinasDebates2016 Among all the presidentiables, Binay and Duterte were the run-away winners in this second stage of the debate series when it comes to eliciting emotions from the viewers. Binay dominated two (Anger and Disgust) out of six emotions, while Duterte conquered the remaining four (Sadness, Love, Joy and Interest). Roxas settled for the bridesmaid finish twice, as the female candidates Poe and Santiago also landed second in one emotion apiece.

As the way it is in communication, it is essential to also listen beyond the spoken words. A message cannot be fully understood without paying attention to nonverbal language, such as underlying emotions. While it is true that a tweet is only composed of 140 characters, it doesn’t mean that it is lacking in terms of elements. One’s laugh can be translated to “haha”, cry to “huhu”, surprise to “whoa”, and the like. This motivated us to have an attempt to deduce the netizens’ emotions towards our presidential candidates.

Another indicator of emotions are the emojis can be incorporated within tweets.

Check out our other analysis here: Data Analytics and Visualizations – 2nd Leg PilipinasDebate 2016